On March 19, 2003, US and British troops began a “shock and awe” campaign to overthrow the government of Saddam Hussein, which US intelligence officials accused of possessing weapons of mass destruction (WMDs). Though no WMDs were found in Iraq, a US-sponsored occupation continued, costing thousands of soldiers’ lives, tens of thousands of civilians’ lives, and billions of US dollars.

The Lord is King; let the -people tremble : he is enthroned upon the cherubim; let the earth shake.

The Lord is great in Zion : he is high above all -peoples.

Let them confess his name, which is great and awesome : he is the Holy One.

“O mighty King, lover of justice, you have established equity : you have executed justice and righteous-ness in Jacob.”

Proclaim the greatness of the Lord our God and fall down before his footstool : he is the Holy One.

Second-century martyr Ignatius of Antioch said, “Better to die for the sake of -Jesus Christ than to be king over the utmost ends of the earth.”

Lord, keep us from making excuses for the sake of disobedience and spiritual death. Help us remember that all of humanity is invited to feast at your table, especially those we would name as enemies. Amen. 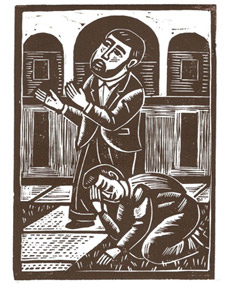