On September 15, 1963, a man later identified as Robert Chambliss placed a bomb under the steps of Sixteenth Street Baptist Church in Birmingham, Alabama. Addie Mae Collins (14), Carole Robertson (14), Cynthia Wesley (14), and Denise McNair (11) were killed by the explosion, and twenty-two others were injured. The girls were attending Sunday school classes at the church. Chambliss was found not guilty of murder, but was given a hundred-dollar fine and six months in jail for having dynamite. He was retried in 1973 and received a life sentence for the bombing.

I consider the days of old : I remember the years long past;

I commune with my heart in the night : I ponder and search my mind.

Will the Lord cast me off for ever? : will he no more show his favor?

Has his loving-kindness come to an end for ever? : has his promise failed for evermore?

Has God forgotten to be gracious? : has he, in his anger, withheld his compassion?

And I said, “My grief is this : the right hand of the Most High has lost its power.”

A reading from the gospel according to Matthew:

A voice is heard in Ramah,

Rachel weeping for her children

and refusing to be comforted,

because they are no more.

Lord, we weep with those who weep and refuse to be consoled. May our tears mix with yours in a river of justice, flowing down like mighty waters, transforming the world that is into the one that ought to be. Amen. 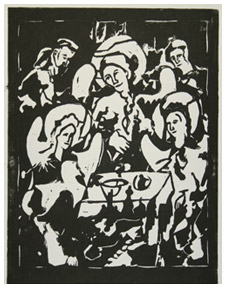